What Others Had To Say This Week

Interesting blog posts and news stories from the past week…

I hope you find some good advice and interesting thoughts.  Have a great weekend!

In this episode of Two Therapists Talking, Jasmine St. John and I talk about what it means to create a safe space in a relationship.

If you have questions or a topic you’d like to hear us discuss, write us at TwoTherapistsTalking@gmail.com.

Tip of the Week: Stand Up for Creativity

Go ahead and be supportive of creativity if you want. But what the title really means is that new research suggests standing results in higher levels of creativity compared to doing the same task while sitting. Groups were given 30 minutes to develop a college recruiting video. Some groups stood, others sat. The groups that stood reported more excitement about the project, generated more ideas, had greater participation and produced better rated videos. So, the next time you’ve got a project to complete, try doing it standing up!

What They Won’t Do For Me…

So many people come to see me and are frustrated that their partner isn’t giving them something that is being asked for over and over. I’m not talking about physical objects. I’m talking about certain behaviors and actions. They don’t tell me they love me. They don’t share their feelings. They don’t empathize with me. It almost always has to do with feelings.

When they fail to get the action or response that they are looking for, they almost always make the same assumption – “my partner doesn’t love me” or “I don’t matter to them.” While that is actually true in some situations, it isn’t always. As we all know but like to often ignore, when we make assumptions we can frequently be very off the mark.

When I have partners coming to therapy over and over, trying to do things differently it is hard to believe that they don’t really care about their partner. Yes, some people may go along just to avoid the stress of ending a relationship but that tends to be a small minority. Coming to therapy with me is work. I challenge, I push, I prod. I make people uncomfortable. It isn’t something most people want to do unless they are actually invested in change. So, seeing someone come back again and again, even if change isn’t happening, makes me doubt that they “just don’t care enough.”

What the situation more commonly turns out to be is that the partner is being asked to do something that they don’t have the tools or understanding to do. Overall our society does  pretty poor job of teaching us how to experience, process and express emotions. It tends to value logic over emotions. The result is that many people never learn to truly feel their emotions and be comfortable with them. Instead they detach from their emotions, suppress them and don’t express them because that was discouraged as they grew up.

In other words, they didn’t learn the language. Expressing emotions means being aware of the emotions, being able to identify them and having the words to talk about them. In order to empathize, a person needs to be able to find and feel that emotion in themselves. If they are cut off from those emotions, that isn’t possible. They may not even have enough understanding to realize that they don’t know how to do what is being asked for. They believe their emotional education was just what it was supposed to be.

Think about it like this – what if I asked you to give me a 15 minute lecture on quantum physics speaking only in Russian? (On the off chance there is one Russian speaking, quantum physicist reading my blog, you know what I mean!) Would you be able to do it? How would it feel if I kept telling you that you weren’t doing because you are a bad person and don’t care about honoring my request? I’m guessing that would get pretty frustrating.

If you find yourself in a situation where your partner says they want to meet your needs and desires but consistently doesn’t, don’t jump to conclusions. Talk to your partner. The solution may be learning some new skills and a new language, not a lack of love or desire.

Thought for the Week 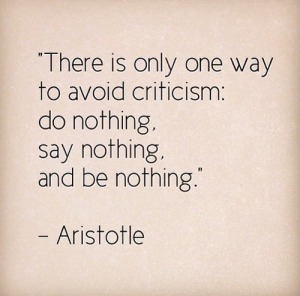 Everyone has their own perspectives, tastes, preferences and desires. And since they do, we will always be subject to criticism from people who don’t like something about us -what we believe, what we do, how we act…it could be anything. The only way to avoid it is to be nothing. When we try to avoid criticism from everyone, nothing is exactly what we must become. We have to give up any sense of self, any identity and not have any preferences. Instead, be authentic and accept the fact that some people will be critical. But there will be plenty who aren’t…those are the ones that should matter in your life.

What Others Had To Say This Week

Interesting blog posts and news stories from the past week…

I hope you find some good advice and interesting thoughts.  Have a great weekend!

In this episode of Two Therapists Talking, Jasmine St. John and I share our thoughts on the concept of unconditional love.

If you have questions or a topic you’d like to hear us discuss, write us at TwoTherapistsTalking@gmail.com.

Tip of the Week – Judging Your Own Assertiveness 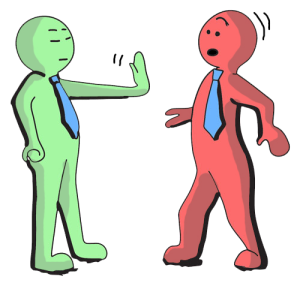 New research suggests that people are not very good at judging how their own level of assertiveness compared to how other people judge them. People who were judged as appropriately assertive by others tended to more often judge themselves as being too assertive. They ended up trying to follow that up by repairing the relationship when no repair was needed. Those judged by others as being either overly assertive or not assertive enough tended judge themselves as being appropriately assertive.  Be aware of the fact that you may not actually be aware! Get feedback from people you trust about how you handle yourself in different situations.

Understanding vs. Agreeing With 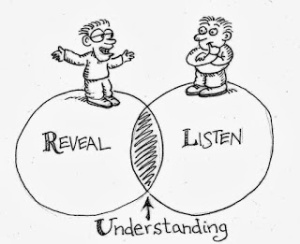 A lot of my work is centered around alternative sexuality. That means, among other things, kinky sex…like the stuff from Fifty Shades of Grey. (Note: I use that example because of its popularity. I am very much not a fan of the books for multiple reasons, but I won’t get into that now.) I recently got into a discussion with someone who said they just don’t understand why anyone would want to engage in kink. It is a discussion I’ve had many times.

This person was telling me all of the reasons that they wouldn’t choose to many of the things that others choose to do sexually. First came the argument that they simply wouldn’t enjoy it. Then there was the litany of what I’ll call “logical” reasons – it could be dangerous or cause long term harm, it is a result of our culture’s need for extreme things, etc.

I countered those objections. I talked about how different people experience sensation differently, so what is painful to one person is enjoyable to another. I talked about how we often are willing to undergo some discomfort in the short term for long term benefit (for me that’s exercising!). I even suggested that we often do things that are harmful or potentially harmful because we deem the cost to be small enough and the benefit to be great enough.

Their response was that they still didn’t want to do any of those things and still had objections to them. And they should. My responses weren’t intended to make this person want to try any of the activities being discussed. The intent was to create awareness of how others might like something or choose to do something that this person wouldn’t.

There is a distinction here that often gets lost in the shuffle. It is entirely possible to understand how and why someone else likes something or makes choices that we wouldn’t make for ourselves without having to agree with them or changing our own opinions.

That’s the place were we can find common ground with people who are different from us. We actually do it all of the time. We all have different risk tolerances.  We have different tastes and preferences. So we make different choices and enjoy different things.

Generally, we get the concept that someone can like something that we don’t. And when it comes to those things even when we have trouble imagining how someone doesn’t like chocolate, we aren’t shaming about it.

I’m not saying that there aren’t things that we feel are wrong for anyone to do. What I am suggesting is that we make sure there is room for understanding how others might make a choice even if we wouldn’t make the same choice for ourselves. Opinions are great. Those that know me know I have plenty. At the same time, leaving room to accept that others have differing opinions without being wrong or bad gives us a lot more room to connect.

The next time you disagree with someone, ask yourself, “can I understand why someone might make that choice, even if I don’t agree?” See if it doesn’t allow for more connection.

Thought for the Week… 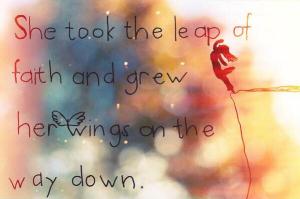 Learning to do something differently always involves a leap of faith. We can prepare and practice, but at some point we have to try on the change and do things differently. We must trust that even if we don’t do things perfectly, we can adjust and adapt – we can grow wings on the way down.